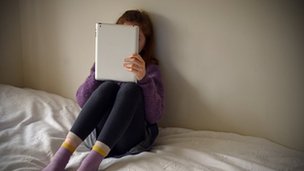 Young children should hear about the dangers of pornography as soon as they have access to the internet, leading head teachers say.

The ready availability of explicit material online has prompted serious concerns from the National Association of Head Teachers.

But he stressed this was not about showing pornography in class.

He told reporters at his association’s annual conference in Birmingham: “There isn’t an easy answer, but as soon as children are getting access to this, it’s time to begin the conversation.”

Stephen Watkins, head teacher of Millfield School in Leeds, said: “Children as young as three – nursery age children – access computers. If they see something that shouldn’t be there, they should know to go and tell an adult.”

Young people need to know how to cope with and avoid these distorted views of relationships.”

He recalled having to respond to a boy in class who had turned up some explicit images when researching the North Pole on the internet. And he said an approach which responded to issues when they arose in a low-key way was the option he favoured.

Mr Watkins added that many parents were concerned about the easy access of such material on other people’s portable devices and smart phones, which they could not block in the same way as their home computers.

He also warned that parents were setting up under-age Facebook accounts for their children which potentially left them able to access inappropriate material. Youngsters under the age of 14 are not permitted to have their own accounts.

He said of 33 children aged ten and 11 in his own school’s top year, he had discovered 24 were already on Facebook.

Mr Watkins said he had written to their parents to warn them they were going against the social network’s own rules and that they were potentially exposing their children to inappropriate material.

An independent survey of 1,009 parents for the NAHT suggested 83% felt pupils should learn about the dangers of pornography in sex education lessons.

Four out of 10 thought this should happen in the early primary school years, while 51% believed it was more appropriate to tackle the subject in the teenage years.

The NAHT said it had no official figures on the number of children accessing pornography, but an event would be held later this year “to get agencies working together on these issues and to pool data”.

According to internet security firm Bitdefender, a survey of 19,000 parents worldwide suggested 1.16% of children had accessed pornography by the age of six.

The NAHT said the issue was increasingly troubling to teachers and heads as they grapple with the impact of pornography on pupils’ self-image and their perceptions of sexuality.

Mr Hobby said his association had been working with a number of agencies for some time to address these concerns.

He added that his association had said repeatedly that young people must be protected from pornography, and children should receive appropriate guidance as part of relationship and sex education.

“We would also like to see improved advice for schools to help them manage these issues most effectively.

“There is no place for explicit materials in the classroom or school, even in the course of teaching about their dangers, but many young people are exposed to such materials on the internet and phones.

“In the face of this, young people need to know how to cope with and avoid these distorted views of relationships.”

The vast majority of parents, 83%, had confidence in schools’ ability to help their children understand the issues, the NAHT survey suggested, while 13% felt the subject should be left to parents alone.

Nine out of 10 felt all equipment allowing internet access should have a default block on pornographic websites.